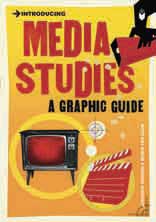 Drawings for the book. Above - MEDIA OVERLOAD (...spot the loon!)
Above - French philosophers stretch to fit: Jacques Derrida and Louis Althusser

Icon Books' Introducing Media Studies is written by Professor Ziauddin Sardar (regular columnist for The New Statesman and Society, expert on Postmodernism, Islam and Cultural Studies, editor of the journal Futures, author of Muhammad, Cultural Studies, Chaos and Mathematics in this series), designed and illustrated by Borin Van Loon. A vitriolic, vituperative, voluble and slightly affectionate dissection of the mass media and the way in which it shapes the events and trends it purports merely to reflect.

Ah, the media... Love them or loathe them, they swamp, saturate and submerge us. The effect is to inform, educate entertain and bore us to death in equal parts. Surely it's possible to be so well-informed that you end up knowing everything about nothing very much. Of course, television isn't necessarily the shibboleth shown here; it's had the power to move us and bring the joys and horrors of the world into our living rooms. Now the internet promises to do "the same but more so" (on command with interactivity) through interactive televisions, flat screens, palm-top computers and mobile 'phones. So much information and so little knowledge; so much cleverness and so little intelligence.

Some subjects defy simple summing-up, so perhaps it is the subject that makes this book seem less that I want it to be. Because this field is relatively new, it does not have a developed narrative to build the book around. Because new media changes the way we view all media, previous paradigms soon seem dated. Because media is approached different ways in different places and media providers view it differently than media consumers, priorities for “understanding media,” the book’s title, can also vary greatly. The writer, artist, and editor set themselves an impossible task, and the failed at it. The book has value in explaining aspects of media studies, and will especially benefit those new to it and want summaries of what certain thinkers thought. A personal response: the review is for the first time I read the book, though written after my second reading. The book made so little impression on me that I bought it again without realizing it (different cover), read it again, and it was not until I was deep into the book that I realized I had read it before. It did not make a strong impact on me, obviously. Mar 03, 2011 Mike Jensen www.goodreads.com

A fun read--these usually are. Surprised that there was no mention of noam chomsky; the book came from a british point of view which meant things were a little different; wonderful example of reading independence day (the movie)--also a great overview of communication/mass media/media studies and theories. No independent media centers or any look at critiques coming from the zapatistas which made me a little sad--then again, it was published in 2000 so the seattle protests in 99 may not have even occurred by the time the script was written. A nice intro--i liked. Jan 07, 2011 Spicy T AKA Mr. Tea. www.goodreads.com

It is interesting introduction to prime one for media studies. I like words and pictures living in perfect harmony. Jan 11, 2011 Ione. www.goodreads.com

This book does what it sets out to do. I don't love it, but then it is pretty theoretical. It does not work from the artifacts up, which I find a more convincing approach. (4 stars. Mike Jensen). www.goodreads.com

Oddly enough, as I'm WAY into Media Studies, this was the first book of the Introducing Series that really let me down. The actual media and communications theories were sort of passed over so the author could wax conspiratorial and get kind of racist. A dozen pages or so are spent explaining how Hollywood films exist primarily to reinforce the ideology of American foreign policy. The analysis of news and news media is misrepretational of journalistic technique and theory, and through out the whole of the text, media is treated and described as if it is one impenetrable monolithic entity with the sole mission of controlling every aspect of your mind. I could have written a better book on the subject. (1 star. Josh). www.goodreads.com

From the Icon Introducing... series, this book explores the complex relationship between the media, ideology, knowledge and power. Filled with illustrations and snappy asides, it provides a tour of media history and presents a coherent view of the media industry, media theory and methods in media research. It explains how "the audience" is constructed and how it in turn interprets the content and meaning of media representation.(Theatre Books)

The next one's a long one, but worth reproducing, we think ...
uneven overview of a suspect discipline, January 29, 2003
Reviewer: bruce bartlett from Toronto, Canada
If this book is less than a coherent whole, the fault is perhaps as much the nature of the subject matter as a failing on the part of the author(s). Already on page 9, we have Jonathon Margolis of the London Observer quoted thus: "Media studies is a pseudo-social science and puffed-up nonsense masquerading as an academic discipline." The accusation may have some merit; however, this same charge could be leveled against any number of contemporary ivory-tower activities, especially the cultural studies and sociology that is inspired by the likes of Michel Foucault and his ilk. (On that note, see the splendid 1997 LITERATURE LOST: SOCIAL AGENDAS AND THE CORRUPTION OF THE HUMANITIES by Yale University's John Ellis.)
That said, the volume is a timely reminder of just how much of modern-day life falls under the umbrella of "media." When we use the word "media," it is often in a far too restrictive sense: we think only of print journalism and the television news. Let us not forget those "media" (see pp. 16-17 epecially) that impinge far more on the consciousness of many global citizens, in particular advertising, comic books, rock videos, the cinema, and the Internet. Like the "news" of the more traditional meaning, all of these media are engaged on the same spectrum of activities. At the least complex and most innocuous end of the spectrum, those activities are essentially narrative ones. That is to say, they are ways of telling a story, value-free means of instruction and entertainment. They are high-tech versions of folk-tales around the campfire. At the other extreme of the spectrum (and the book leans to analysis of what goes on at this end), the activities are far more nuanced and nefarious. We are given messages not intended to inform intelligently, but to persuade unconsciously. We have not narrative, but propaganda. We are treated not as citizens, but as consumers. To put it another way, media is just a tool of market forces. One comes away from the book asking this question: At the dawn of the twenty-first century, is "the media" (the term here understood in its broadest sense) ultimately a force of enlightenment, or of darkness?
The highbrow comic-book format of the Icon Books INTRODUCING series (a series which on the whole is a wonderful set of primers on important thinkers, ideas and issues, past and present) seems to preclude anything like a formal table of contents (even if there is a half-assed index). So it might be worth listing what topics and themes the volume does treat (its examples tend to be heavily UK ones, hence not always readily familiar to North American audiences). Here is a 20-item ad hoc chapterization. Teachers (high school or post-secondary) seeking an entertaining beginner-level book for media studies might find it useful to have students do a pick-and-choose from items below. (I for one plan to purchase the book for use in the "media unit" of my senior high school English classes, if for no other reason than to whet their appetites for the Icon Books INTRODUCING series.)
(a) introduction [5-11]
(b) the "Sunny Delight" affair [12-15]
(c) media as big business [16-20]
(d) a mock UK History Channel "Evolution of Media Studies" [21-38]
(e) a primer on semiotics and some corresponding key vocabulary [39-49]
(f) media as a political tool [50-60]
(g) the notion of audience, centering on the TV show DALLAS [61-70]
(h) two competing models of "representation," `hegemonic' vs. `pluralistic' [71-75]
(i) stereotyping, esp. race and gender [76-88]
(j) the "news story" [89-100]
(k) comics and animation [101-104]
(l) radio [105-106]
(m) advertising [107-111]
(n) television & film & its production method [112-131]
(o) critical understanding of film [132-141]
(p) "foreign" & "alternative" film [142- 153]
(q) the newer technologies [154-58]
(r) media mega-corporations and "synergy" [159-166]
(s) fame & celebrity [166-169]
(t) conclusion re "the future" plus reading list [170-75]

2 out of 5 stars Too scattered, July 31, 2000
Reviewer: A reader from virtual
This book spends too much time trying to decide what it wants to do. Is it a history of media studies? A state of the field report? A technical manual of film terms? A primer on media and culture? How can you do all those things *clearly* in 173 pages of illustrated material? You can't. The result is a jumbled mess, filled with unhelpful pictures.
The presentation is uneven and unamusing. Some valuable information about the state of the discipline is included (who knew that "Uses and Gratifications" was dead?) but so much more is left out. What's really missing here are pointers to more information. For example, p. 123, the *one page* on arguments against television, Neil Postman's perspective is presented but he is not accredited (nor is anyone else). You'd want to be able to follow up on these sort of insights. Media studes is one field where there are too many opinions to rely on only a few sources, especially if you can't follow the insights back to the originator.
Strengths include a cultural studies perspective, expecially with respect to groups stereotyped /marginalized in media portrayals, as well as a few criticisms of the world wide web.