Borin Van Loon : Who He? /Scroll down for Links


Borin's  retrospective exhibition (scroll down to bottom of the page).

New work from 2012> has been shown in Felixstowe Reunion Gallery, Bury St Edmunds Apex Gallery, Colchester's  Digby Gallery at the Mercury Theatre and Frame Workshop in Ipswich, Suffolk. New departures and challenges are embodied in this sequence of vibrant, non-representational, non-figurative works in rich, colour-saturated acrylics, often on glass, with integral painted framing. Exploratory, experimental and, as Marcel Duchamp has it, definitely 'retinal' in character. The stream of new work will continue. Borin exhibited his work regularly in the independent art gallery, The Freudian Sheep at 104 St Helens Street, Ipswich until its closure in September 2016.


Borin Van Loon gave an illustrated talk 'From Superman via Psychedelia to Surrealism' on his work as collagist, illustrator and painter and shared what motivates and inspires him (that's what it says on the poster) in an event organised by Ipswich Art Society at the Co-operative Educational Centre, Ipswich. Over 90 images were used, some, never-before-seen pieces of Borin's earliest paintings and collages. There is an illustrated review of the talk by artist Mark Beesley on the Freelance website (scroll down this page for Links).

We recently found an intriguing review of 'Heroine', a women's comic from the 70s which Borin contributed. It's in the Collage Comics page with Suzy Varty's cover image.

Borin's book DNA for Beginners  was republished (January 2011) in a revised edition as DNA: the molecule that shook the world by Columbia University Press in America. First published in 1983 as DNA for Beginners, the authors arranged with CUP for a major overhaul of the information in the book, meanwhile preserving many of the favourite illustrations and strips. This radical surgery could not have been achieved without the sterling work of Milenda Lee, Senior Designer at at CUP. Hat's off to her!

Bart Dickon, The Ideologically-Sound Secret Agent, of The Chap  magazine (and others) has been anthologised, at over 100 pages, in The Bart Dickon Omnibus by Severed Head Books. You can buy copies of this magnus opus via secure server whether or not you have a PayPal account; there is supporting material and a Bart Mart for Bart Dickon gifts, too! He now has a presence on myspace.com and has a regular blog of his adventures for fans to read - see Links below. The Omnibus has garnered impressive reviews. Catherine Larner's article on Borin and The Bart Dickon Omnibus was published in the January 2008 issue of The Suffolk Journal.
(We are able to offer many images on this site as limited edition colour prints. Contact us here. The Captain Beefheart print continues to sell from time to time and the sad death of the subject seems to have renewed interest among fans.) 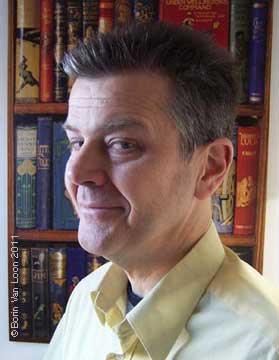 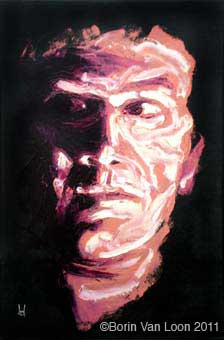 Accidental Etymology of 'Borin Van Loon' [see also The Van Loon family page]
1. So Soon: Slag Boom Van Loon (Mu Ziq: Speedy J). 2001 Remix Album on label: PLANETMU featuring Boards Of Canada. As played on Radio 1 by the much-missed John Peel.
2. J.R.R. Tolkein's 'Lord of the Rings': fictional world of Middle-earth, Borin is a Dwarf of Durin's Line, the second son of King Náin II. He was the ancestor of both Balin and Gimli, Elf-friend of the Company of the Ring.
3. Loon: Great Northern Diver [Gavia immer], see Page of Loons. And just to show the breadth of interest (in this case of mythical proportions) of this Rennaissance Man, we found this book during a recent trawl of the web: "Cytotaxonomical Atlas of the Balkan Flora (Cytotaxonomical Atlases, Vol 4) by Borin Van Loon. Lubrecht & Cramer Ltd; Released: August, 1987; List Price: Ł55.06". If only this Borin had actually written the work...
Borin Van Loon & Bart Dickon now appear on Wikipedia.

Portrait Of The Artist As A Young Triclops

The Links section
Let us know if you have an appropriate website and would like to link to us...
Ipswich Historic Lettering website involves Borin's interest in the use of historic lettering on walls in his home town of Ipswich in Suffolk (and further afield). The galleries of images gathered over several years show a bygone era of advertisements, company names, street signs and architectural lettering. The site has continued to develop since its inception 2003 and browsers are asked to contribute information, images and amendments.
Two-headed thingies is a blog which has now featured Borin's Brain Damage work. It's nice to see a large number of scans of collage comix pages and Mail Order Mutations.
The Chap magazine regularly featured Borin's collage comics and 'A Severed Head' ran there for several years.
'Lonely Planets: The natural philosophy of alien life' David Grinspoon's Funky Science site. Borin has contributed to his award-winning book.
Mary Reufle's poetry books are available from Cornell University and are also on amazon.com. See our Weather book page.
Waveney Clarion website built by Borin and Don Mathew, commemorating East Anglia's famous community newspaper to which Borin Cotributed in 1970s and 1980s.
Paul Gravett, comics afficianado, has been very encouraging to Borin's Bart Dickon project. See his many books on comics.
Louisa Gaylard's music on Facebook. See Album covers page.

Borin's  retrospective exhibition at The Freudian Sheep Contemporary Art Gallery, Ipswich from June 6 to 3 July 2015.
The exhibition comprised all four exhibition spaces of the Freudian Sheep’s 17th century merchant’s house. Works ranging from collages, early posters, oil paintings, watercolours, comics and three dimensional work were on show; some of the work has never been exhibited before. Drawing inspiration from the Belgian and Paris Surrealist movements and the psychedelic art of the 1960s, Borin has been developing his unique style of surreal humour, photo-realistic paintings and collage comics over the last forty-five years.
Since 2012 he has embarked on a new sequence of non-figurative paintings on glass with integral painted framing, rich in saturated colour, sometimes using mirrors. A selection of these new works will be on display in The Full Sunlight Room. Fragmented portraits of manipulated print media will be on display in The Facial Make-Ups Room.
Elsewhere, surrealism rubbed shoulders with skyscapes, portraits and works which disturb and amuse in equal measure. Borin’s unique collaged graphic novel The Bart Dickon Omnibus was on sale, plus a very limited signed edition (of ten!) of the collected works of Roy of the Rogers comic strip.
See the Flickr collection of the whole exhibition... and now the film 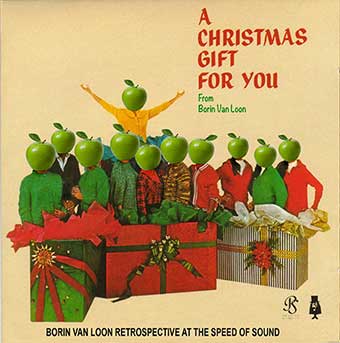 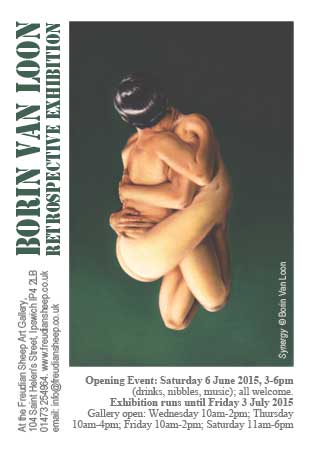 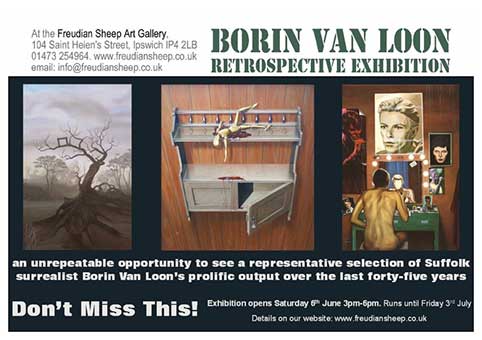