Inspirations
[Note: images of the psychedelic posters referred to here have been removed to avoid copyright infringement; they have been replaced by links to images elsewhere on the web.]


Having given a talk (to the Ipswich Art Society in autumn 2011 – see the poster here) about the work which has inspired him, Borin thought it might be interesting to include some of the material here and a some examples of his early work which sprang from it.

The period around 1967 was characterized by an explosion of visual invention involving typographical, colour and illustrative elements pushed to new heights. Silk screen printing and offset lithography, such relatively crude processes compared to the 21st century's digital/ink jet methods were also pushed by designers and artists to deliver extraordinarily subtle and striking results. Here are a handful of works which inspired Borin Van Loon's early exploration of the language of psychedelic posters.

CIA v UFO by Hapshash & The Coloured Coat
Up to a certain point, the movement to promote musical events (often billed anachronistically as 'dance concerts') by means of recognisably psychedelic posters occurred mainly on the west coast of America. Visual artists in, excuse the cliché, Swinging London saw, learnt and came up with some of the best creations in an all-too-brief cultural moment. This example is one of a string of fine posters by the team of Michael English and Nigel Waymouth and features foil paper, split inking, dazzling colour, elastic lettering and eclectic iconography, all characteristic of their work as 'Hapshash & The Coloured Coat'. They drew on Art Nouveau lettering, whiplash curves, Aubrey Beardsley and Alphonse Mucha as well as fine art sources, all spiced with wit and a sense of playfulness. Dealers and collectors have created a lucrative market for psychedelic posters in recent years.
See also Borin's Black Sun page: a painting inspired the first Hapshash & The Coloured Coat LP cover (illustrated there).

Jimi Hendrix, Fire by Larry Smart
A simple and powerful image of one of the most iconic faces in early rock, particularly significant as James Marshall Hendrix started his meteoric rise under the tutelage of Chas Chandler in the UK with British sidemen Mitch Mitchell and Noel Redding making up The Jimi Hendrix Experience. Borin actually got to see this poster in its large scale printed form at an exhibition of posters at the Victoria & Albert Museum in London in summer 1998 (typically, the organisers left it out of the book published to catalogue the exhibits, possibly due to copyright limitations). It rose in public conciousness again in 2010/11 when Miranda Hart's situation comedy Miranda was broadcast and this image was seen hanging in Gary's Bar, the setting for many scenes. Signed, 2nd printings of the image have been available at a high price from London dealers. Larry Smart died some years ago. Inspired by this and other images in the late sixties, Borin went on to create a number of Hendrix images over many years.

Mister Tambourine Man by Martin Sharp
Australian designer Martin Sharp moved to London in 1966 and became art director of Richard Neville's Oz magazine and became part of London’s countercultural scene, designing psychedelic posters for clubs and musicians. For a time he was Eric Clapton's flatmate and presented him with a song lyric which seemed virtually impossible to set to music. Jack Bruce took the lyric and turned it into one of the great psychedelic rock songs of the era: Cream's Tales of Brave Ulysses from the album Disraeli Gears. Sharp was also responsible for the back and front covers for that LP, although it took Borin years to discover it. In those days the artist rarely got a credit for his or her work on the 12 inch square sleeves – a main selling point – but 'Printed and made by Ernest J. Day & Co. Ltd' or '... by Garrod & Lofthouse Ltd' was always prominently credited: the power of the printer/manufacturer. The poster of Bob Dylan is visually stunning with Sharp's characteristic humour showing through in the witty 'Blowin' in the mind' lettering and partially obscured song title emphasising the word 'urine'.  He was unashamed to use basic tools to achieve his artwork and credited himself as 'Sharp Martin (& his silver scissors – snip, snip!)'. Currently living back home in Australia as a painter, he has made a selection of his posters available once again for the modern audience. This particular era-defining piece featured in Mick Farren's hard-to-find, large-format 1976 book Get on down: a decade of rock and roll posters.
Steve Miller (Blues) Band by Victor Moscoso
in 1966/7 Moscoso set the American standard with what he still describes as 'classic psychedelic'. Moscoso has said that when somebody warns him that he can't put two colours together in a design, this fills him with a dermination to do it. The colour vibration he produces is unmistakable. Some fine examples are reproduced in the compilation of his work: Sex, rock and optical illusions. He went on to design a back-and-front colour cover for Zap Comix which has become a classic. He's also a dab hand with a dip pen, so all-in-all a good egg.  The poster above would have been created by hand in monochrome with detailed instructions to the printer to separate out defined areas to be printed in specified colours. Moscoso is also a master letterer.

'La Fenetre Rose' by Mike McInnerney and Dudley Edwards
The former writes: 'A poster with a spiritual message produced by the Omtentacles design team of myself (Michael McInnerney) and Dudley Edwards. We conceived of an evolutionary hippy head as the key image for a psychedelic show in Paris. The head carries a number of meanings. It is a tree of life that expresses evolutionary consciousness, It is the geodesic geometry of rational imagination expanding into space... ' McInnerney had only a black and white photographic copy of the poster – the printers having destroyed most copies because the client didn't have the funds to pay them. Since then a colour image of the poster has surfaced online. A partial, tiny version of the poster (seen in the artists group photo below) acted as an inspiration for an early painting in oils on canvass by Borin Van Loon: In sweet creative anguish. 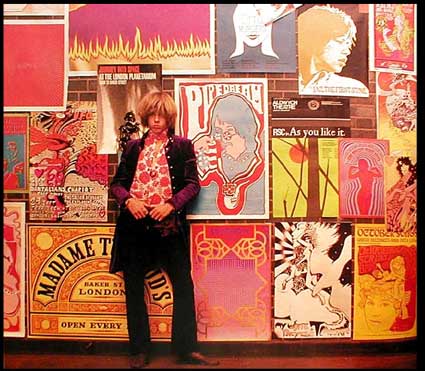 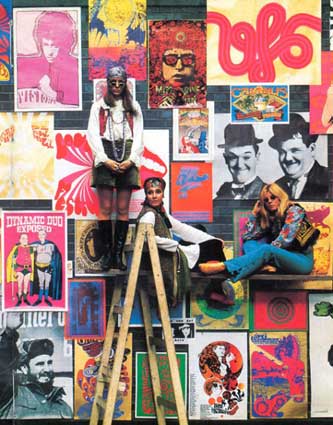 Whoo-hoo! Here it is from a copy of the Sunday Times Colour Supplement around 1967. Printed on coated newsprint. cut and punched and put into a lever arch file in a damp, cold/hot loft for 47 years and it still looks great. Larry Smart's 'Hendrix' poster is visible in almost all its glory at upper left. The only other posters not shown in the studio variants above: 'Electrical Love' (Donovan by C.H. Johansen III, Pandora Publications) below the Love Festival lips. 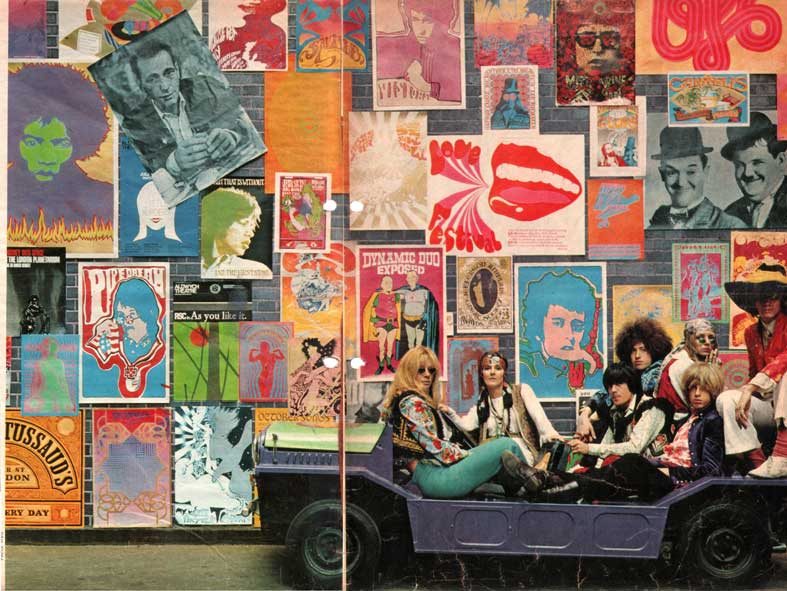 La fenetre rose
A real rarity; so rare, that the artists themselves never got a copy (however, a colour image has appeared on the late Mike McInnerney's website –click the title above). Mike McInnerney and Dudley Edwards called themselves OM Tentacles and were commissioned to produce a poster for La fenetre rose, a 1967 psychedelic show in Paris featuring The Spencer Davis Group, Keith West & Tomorrow (My white bicycle), Cat Stevens and Soft Machine. Once printed, the client couldn't pay for the posters and almost all were destroyed by the printers. Borin spotted this as a tiny detail in a photograph of 'The men behind the poster boom' in yet another Sunday supplement (see cutting below) and was inspired. Once he'd started to work in oils, he used this as a jumping off point for his painting In sweet creative anguish in the early 1970s. 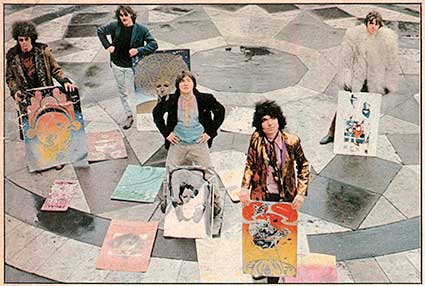