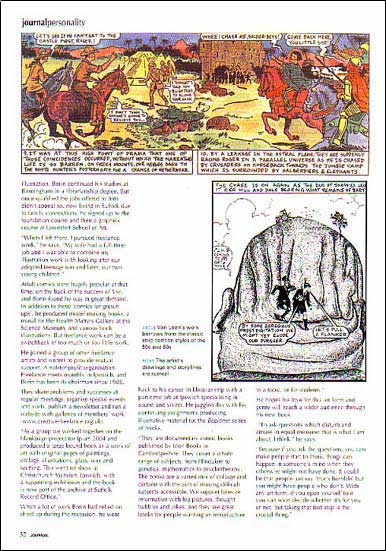 "How many of us long to take a break from the nine to five and follow our dream?

For 15 years one Ipswich man has managed to juggle a salaried part-time job at Suffolk Libraries, to support his wife and three children, with his real passion for illustration, working as a freelance on a series of educational books, magazines and journals.

'In essence I have two dream jobs," he says. However, recently he was using his little remaining free time, holed up in the studio conversion at the back of his modest town centre terrace house, dedicated to a project which he sees as the culmination of his life's work.

The Bart Dickon Omnibus is a graphic novel constructed from numerous images 'borrowed' from various sources, cut and pasted together in an astonishing compilation.

'I did a huge amount of work on adult comics as well as magazines and advertising work in the 1980,' says the author. 'A lot of that work has been reworked and republished in the Bart Dickon book with chapters and a through-written story.'

An acquired taste, it has to be acknowledged, the book has been self-published, working with Five Castles Press in Ipswich, and displays a dark and bizarre sense of humour. Not something you would associate with the author on meeting him.

'The book will appeal to people looking for the unusual, people who aren't afraid of comic strip panels and people who like the quirky, the surreal and hopefully like a good laugh,' he says and goes on to explain that the lead character spends most of his time with his head severed from his body.

There are more acceptable references to Greek mythology, and the drawings gain their inspiration from Victorian steel engravings, children's annuals, American advertising copy, and the golden age of line illustration. The characters' names are subversions of the radio light entertainment programme Dick Barton Special Agent.

'The book doesn't fit into any particular category, it's a bit special, it's a bit different, says its creator, Borin Van Loon.

Yes, an unusual name which has a colourful etymology if you are to believe the family history on his website (www.borinvanloon.co.uk). But, as with much of this puzzling man, all is not as it seems.

So, Borin Van Loon has been accepted by all his clients and colleagues. Indeed his name and the work he produces seem very much at odds with his professionalism and creativity, his sense of fun, and his gentle, quiet, friendly and unassuming nature. So how did it all start?

'When I was quite young, my brother brought home a couple of horror comics imported from America. One of those stories was about a wall of living flesh in the basement of this old castle. I was fascinated about the the whole notion – at that age I was very impressionable. So my book contains a tribute to that kind of concept.'

Surrealist art as a whole has always intrigued him. 'I remember going to the Tate Gallery with a school friend. We went all the way round and ended up at Dali and Magritte. I stood in front of Autumn  Cannibalism, the Dali painting and was transfixed by it.'

Until that point he hadn't pursued art at school, although he had produced posters for events of clubs he had belonged to because no one else wanted to do it.

'I was looking at communications, graphic imagery and visuals and realised I enjoyed doing it. I painted psychedelic posters, which were emerging around that time. I fell in love with that form.'

Still experimenting with painting and illustration, Borin continued his studies at Birmingham in a librarianship degree. But once qualified the jobs offered to him didn't appeal so, now living in Suffolk due to family connections, he signed up to the foundation course and then a graphics course at Lowestoft School of Art.

'When I left there, I pursued freelance work,' he says. 'My wife had a full-time job and I was able to combine my illustration work with looking after my adopted teenage son and later, our two young children.'

Adult comics were hugely popular at that time, on the back of the success of Viz, and Borin found he was in great demand. In addition to these 'comics for grown ups', he produced model-making books, a mural for the Health Matters Gallery at the Science Museum, and various book illustrations. But freelance work can be a switchback of too much or too little work.

He joined a group of other freelance artists and writers to provide mutual support. A not-for-profit organisation, Freelance meets monthly in Ipswich, and Borin has been its chairman since 1988.

They share problems and successes at regular meetings, organise special events and visits, publish a newsletter and run a website with galleries of members' work (www.creative-freelance.org.uk).

"As a group we worked together on the '/blankpage' project for Ip-art 2004 and produced a large bound book as a work of art with original pages of paintings, collage, illustrations, glass, wax and knitting. This went on show at Christchurch Mansion, Ipswich, with a supporting exhibition and the book is now part of the archive at Suffolk Record Office."

When a lot of work Borin had relied on dries up during the recession, he went back to his career in librarianship with a part-time job at Ipswich specialising in sound and vision. He juggled this with continuing assignments producing illustrative material for the Beginners [later Introducing] series of books.

'They are documentary comic books published by Icon Books in Cambridgeshire. They cover a whole range of subjects, from Hinduism to genetics, mathematics to psychotherapy. The books are a varied mix of collage and cartoon with the aim of making difficult subjects accessible. We support bitesize information with big pictures, thought bubbles and jokes, and they are great books for people wanting an introduction to a topic, or for students.'

He hopes his love for this art form and genre will reach a wider audience through his new book.

'To ask questions which disturb and amuse in equal measure: that is what I am about, I think,' he says.

''Because if you ask the questions, you can make people start to think; things can happen in someone's mind when they otherwise might not have done. It could be that people just say "that's horrible" but you might have people who don't. With any art form, if you open yourself to it you can soon decide whether it's for you or not, bt taking that first step is the crucial thing.'