A chance to trace some of the precursors of Bart Dickon and  'A Severed Head' (a title borrowed from the novel by Iris Murdoch - not to mention the 1971 film of the tale starring Lee Remmick and Richard Attenborough). The original idea of producing a linear comic strip by drawing on obscure material from many sources then rescripting these images, has a slightly subversive aspect which appeals to Borin Van Loon. He pays tribute to the following:-

1. The extraordinarily original animations created by Terry Gilliam for the children's (but just as much for adults) television programme 'Do Not Adjust Your Set' in 1968 and later for the equally iconoclastic 'Monty Python's Flying Circus' (Gilliam has, of course, gone on to great things in feature film direction, not least the brilliant 'Brazil' - interestingly, he recently said that he didn't know where all that early animation inspiration came from; he - like me - led a fairly hermetic life surrounded by mountains of cuttings and clippings);
2. Some of the agitprop collages in Situationist publications of the seventies, such as Christopher Gray's prescient 'Leaving the 20th Century';
3. Chris Garratt and Mick Kidd's creation 'Biff', which I saw grow from underground publications like 'IT/Maya News' to take a regular slot in 'The Guardian' newspaper in the U.K.;
4. Max Ernst's revolutionary collage novels such as 'Une Semaine De Bonte' and 'La Femme 100 Tetes' (either 'The Girl With A Hundred Heads' or, phonetically, 'The Girl Without A Head') which wallow in the bountiful steel engravings of cheap Victorian fiction and technical/ medical textbooks: once seen never forgotten.


'The Greatest Sin'(1984): the themes of vegetarianism, homosexuality, freemasonry and opium abuse proved too strong for the local arts association. 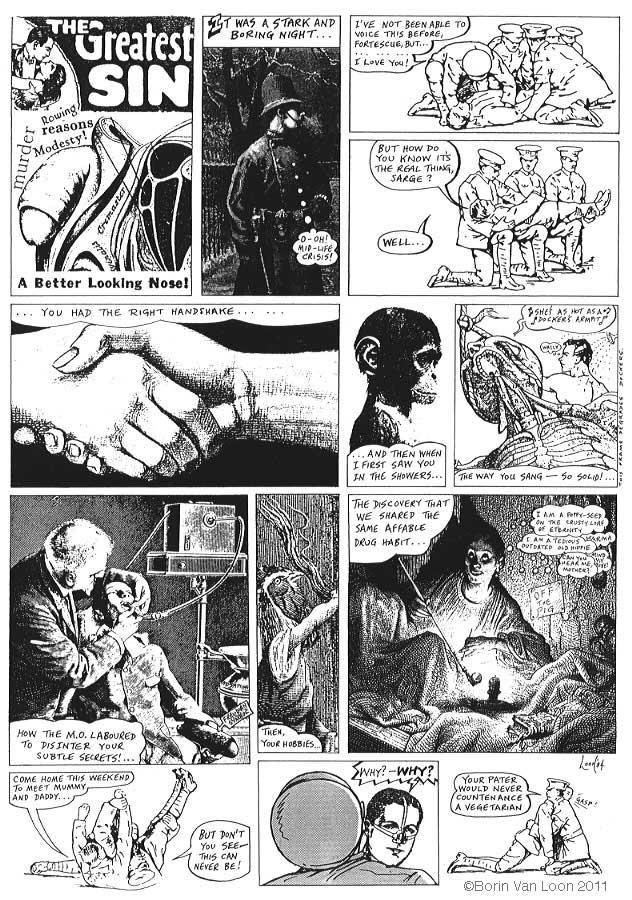 "Without realising it, I was adopting a decidely postmodern approach with shades of the hip-hop driven sampling ethos which entered music in the early eighties. I have always been one for the magpie approach to collage, sampling and the intermingling of mainstream and oblique sources: basically cutting up hundreds of bits of paper and scripting the strip as I go along, drawing inspiration from the images I find by serendipity or which I can remember having in my files. This approach reached its first fruition in the Birmingham Arts Lab publications 'Street Comix' which dated from the late seventies and were driven by the fertile brain and flowing pen of my old chum, Hunt Emerson.

When I was asked to contribute to their forthcoming title 'Heroine', which dealt with feminist issues and mainly female contributors (except, I'm proud to say, for me), I went into overdrive and the following three pages popped out fuelled by punk lyrics, sexual politics and satire. It also gave me the opportunity to use the linear development of each story to comment on itself and the strip conventions - there is a long and honourable tradition of this throughout twentieth century strips. "
See below the panels for a review. 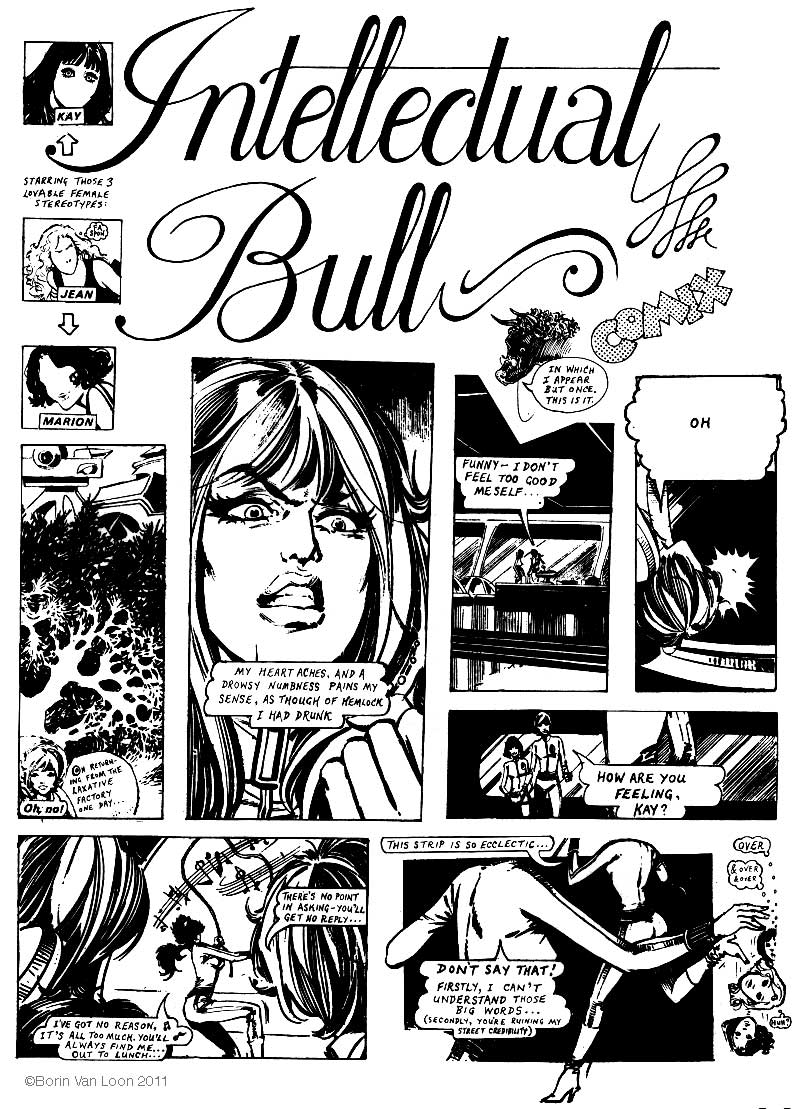 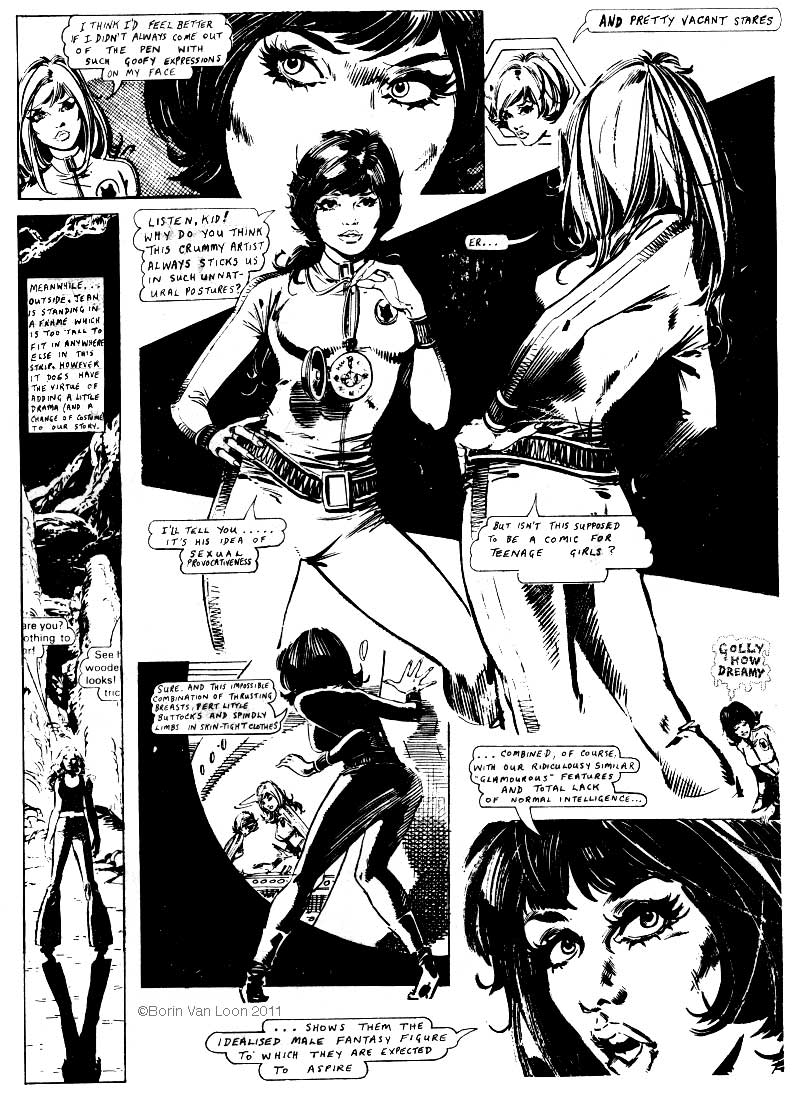 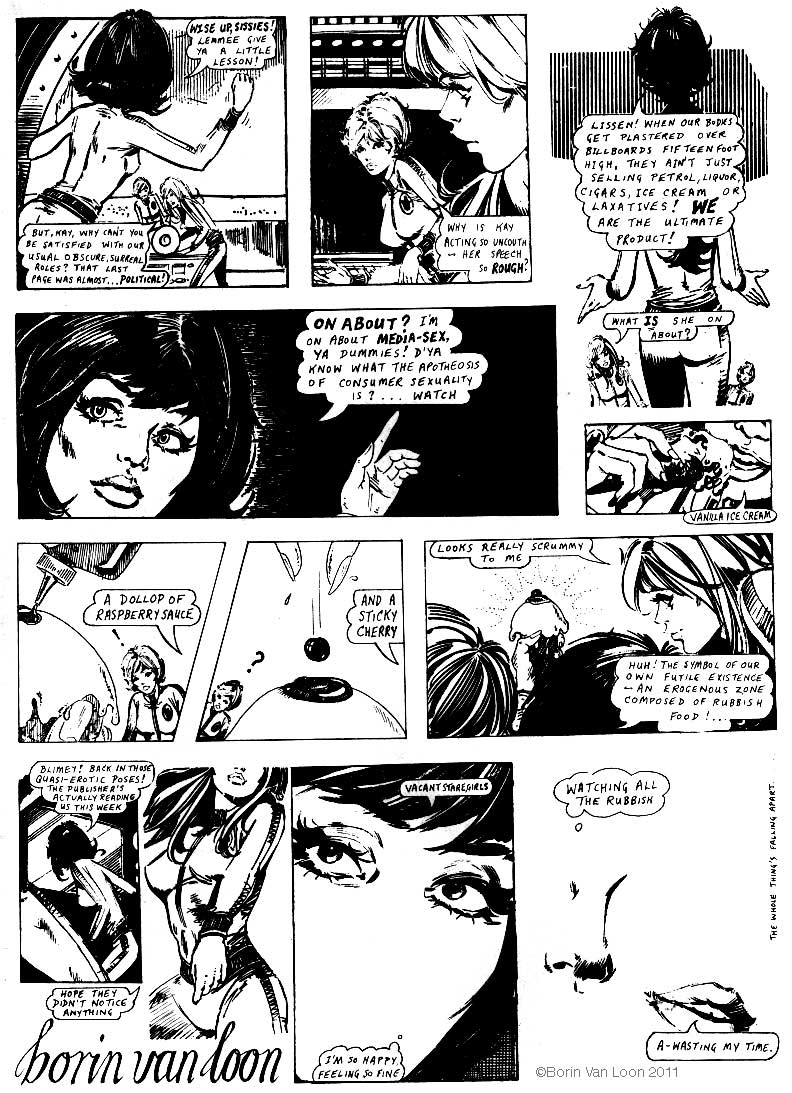 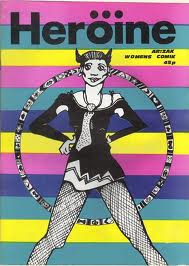 September 2011: we just came across this review of 'Heroine Comik For Women':
See the whole review with large image of Suzy Varty's  colour cover on: http://www.comixjoint.com/heroine.html

... This long preamble may seem out of place for a 1978 British underground like Heroine, but it's appropriate in context with the comic book's content. Heroine was the first women-driven comic book from Britain and features nearly all British women artists (American Trina Robbins is the exception) and one man (Borin Van Loon, who adroitly examines the sexual stereotyping of females in comic books).

... Borin Van Loon follows [the Trina Robbins' strip] "Tree" with the three-page "Intellectual Bull Comix," in which three pretty young women characters temporarily step out of their stereotypical comic book roles to discuss the objectification of their bodies for male consumers. The story is brilliantly conceived and executed, and I only wish that Van Loon, an adventurous artist and author, had given us several more pages in the same vein.

... Which is why this particular review is so long. British-born or not, Heroine seems like a stylistic milestone in women's comics, with a more polished look to the illustrations and a more sardonic and sophisticated sense of humor (especially from the British women) than previously seen in feminist comics. Heroine feels like a bridge from the old feminist underground to the upcoming wave of women creators in alternative comics (e.g., Dori Seda, Julie Doucet, Mary Fleener, Carol Lay, Carol Tyler, Phoebe Gloeckner, Krystynne Kryttyre, et al).

I may find similar milestones in other comics as I continue reviewing underground comics for this site, and if so I may adjust this review accordingly. But to me, Twisted Sisters (1975), which is the most recent major predecessor to Heroine that I can recall off the top of my head, seems more like a continuation of the original form of women's underground comics than a new stylistic milestone. I'll have to keep hunting to find a comic like Heroine that was published prior to 1978 before I change my mind about the historical significance of Heroine. I'm certain I won't find one of European origin, though, so in some sense the landmark status of Heroine will remain forevermore. At least in my obsessive little world.

HISTORICAL FOOTNOTES:
It is currently unknown how many copies of this comic book were printed. It has not been reprinted. Ar:Zak (which appears on the front cover) is an imprint of the Birmingham Arts Lab Press, which is itself an offshoot of the Birmingham Arts Laboratory (or Arts Lab). The Arts Lab was an experimental artist collective based in Birmingham, England from 1969 to 1982. It supported cutting-edge creativity within numerous art forms, including comics, theater, music, performance art, novels, and photography. In 1974, Hunt Emerson took control of their printing press and led the collective into comic art under the Ar:Zak imprint, starting with Emerson's own Large Cow Comix.


Borin has written a two-part article on 'Comix For Grown-Ups', quoting many of his favourite comix artists. It appeared in an edited form in the U.K. Association of Illustrators journal issue dated January 2000.